A Sun and Shield

“For the Lord God is a sun and shield; the Lord will give grace and glory; no good thing will He withhold from them that walk uprightly.”

“God doesn’t call us to be comfortable…”

“But God doesn’t call us to be comfortable. He calls us to trust Him so completely that we are unafraid to put ourselves in situations where we’ll be in trouble if He doesn’t come through.” — Francis Chan from Crazy Love: Overwhelmed by a Relentless God

(You’re welcome to share, pin, use this graphic but please keep the tiny watermark in the corner that credits the creator of the graphic.)

To Love is to Risk

I haven’t read Orphan Justice yet but I love this quote:

“To love is to risk. Opening your home to a foster kid will be emotionally difficult. It’s inconvenient. It’s hard. It’s messy. It’s exhausting. I guarantee it.

But all too often, selfishness keeps us from taking care of these children. Somewhere along the way, in our concern for an easy, happy, comfortable life, we may be missing the heart of the gospel — to seek and save the lost, to reach out to the forgotten and the oppressed, to love sacrificially, and to pour our lives out so that others can catch a glimpse of Jesus.

If the only reason we refuse to get involved in foster care is because ‘it is too hard emotionally’ or ‘we can’t handle saying goodbye,’ we may need to repent of self-absorption. We must ask ourselves the question: Do we truly love our neighbor as we love ourselves? What if a foster child is the ‘neighbor’ that God has brought into our path to love?” —Johnny Carr, Orphan Justice

People who consider foster parenting are often concerned about “getting too attached” to their foster children. But what is the alternative? To only half-love them? I’m already head over heels for our new foster son. I’m not afraid of getting too attached. I’m a grown up; I can survive having my heart broken. He’s an innocent, precious treasure; he needs and deserves to be loved with abandon.

Pain is No Measure of His Faithfulness

When I was struggling with anger, grief and justice recently, a thoughtful friend shared an encouraging note along with this song “Open My Hands” by Sara Groves. It spoke deeply to my soul, especially the two lines above. I hope it encourages you. Psalm 84:11 says For the Lord God is a sun and shield: the Lord will give grace and glory: no good thing will he withhold from them that walk uprightly.

“Open My Hands” by Sara Groves

A Day in the Laundry

A reader challenged me to write a day in the life post. (Hi, Gabrielle!) I started thinking about Tuesdays, one of my two work-from-home days, when I do all of my laundry between working and parenting. A lot of people despise laundry but I really don’t mind it. In fact, I kind of like doing it… I thought I could share some ways I make it efficient so it doesn’t consume too much of my life.

Pre-Sort
Jason and I have two laundry baskets in our closet: one for dark clothes and one for light clothes. When I pull out our two baskets and Ali’s one basket on Tuesday mornings, it’s pretty quick to sort hers into ours. If I have more than two loads worth, I’ll split out a brights load. Extra-dirty stuff is in a separate basket in the laundry room. (Examples: Lucy’s dog crate blanket, Jason’s outdoor work clothes, muddy things, baby bibs, wash rags, toddler accident clothes)

Unload-Fold-Sort
I fold the clothes immediately after taking them out of the dryer and sort them as much as possible right then, too. The clothes never leave the laundry room until they’re taken to be put away. Each time the clothes move it adds more time. (You will never find laundry piled up in my living room or in folded stacks on my kitchen table—it’s either in our bedrooms or it’s in the laundry room.) The first load is folded while the second load is drying and the third is being washed. It takes 10-15 minutes. Since Jason and I have two baskets that go to our room, I put all of his clothes into one and mine into the other to speed up the putting away process. Ali’s clothes are small enough that I can make three piles in her basket as I’m folding her clothes: one for pjs, one for tops and one for bottoms—these coordinate with the three drawers in her dresser, making putting away her clothes take less than 5 minutes.

Helper
Ali loves to be my laundry helper. Sometimes her “help” slows me down but I realize I’m sowing seeds for the future so I never turn away her assistance . She’s good at helping me move the loads from washer to dryer. She also likes “the matching game” which is simply finding sock matches. Her folding, sorting and putting away skills are not there yet.

There you have it. I do three loads of laundry in one day and it takes less than an hour. I admit, we have a few factors that make it easier on us. There are only 3 of us (for the moment). When we had two little girls it took much longer to sort through all their similar size and color little things. Also, Jason and I are not very big people so we can probably fit more of our clothes into a load than bigger people. And lastly, we re-wear a lot of clothes multiple times before washing, especially larger and heavier items like pants and sweaters. Oh, also, I very rarely iron anything.

Why I Love June:

Can anybody hear me? I’m down in this cave…

Sorry for dropping off the face of the earth—er, blogsphere—this week. Time has gotten away from me. I have several things I was planning to share this week…projects, house build update, Precious’ baby dedication at our church…but they will show up here next week instead. Between the above mentioned activities, I’ve also been on deadline at work the past few days.

We’re housesitting for friends this week. My parents are super great but it’s nice to have some space—a lot of space, actually—for just the three of us. Jason currently has Precious with him down at our home build—in the air conditioned Silver Bullet I imagine, since it’s almost to the triple digit temps out there. Our foundation block started going in this morning. Yay! Meanwhile, I’m working away in a very quiet, peaceful house. I looked out the window this morning and spotted this deer grazing in the backyard:

I’ll be back soon!

Back in December, I wrote about our decision to get an inflatable baby bath tub so that it could be easily stored for a future baby. Precious has been using the full size tub for baths since she was about 7 months old so rather than deflate the The Safety 1st Kirby Inflatable Tub, I thought I’d try it out for a few other uses. One day I was sitting out on the back deck to work and I used it was a place for Precious to sit and keep her toys contained. (This was before she was crawling. If I tried this now, she’d be out of it in a minute.) 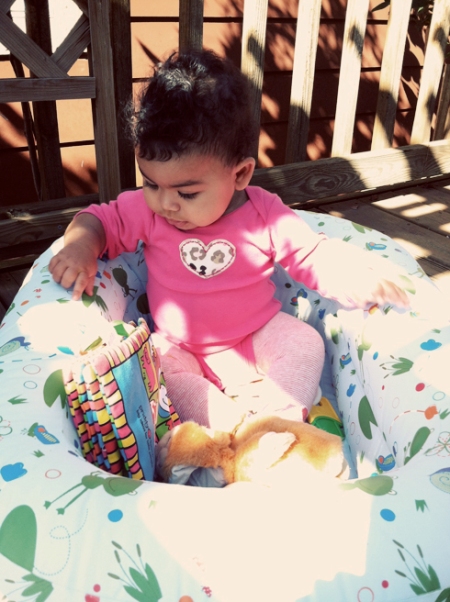 Then, once it was warm enough for pool time, I used it as a kiddie pool. It was a handy way to keep her contained for a few seconds while I got myself situated to get into the water.

Despite the warning label that says it is not a floatation device, we’ve also been using it as a baby boat in the pool. Shhh… don’t tell anyone.

Clearly, I’m a fan of the The Safety 1st Kirby Inflatable Tub. It has turned out to be well worth $17 for us.

Yearly Goals: Looking Back and Forward

A couple of years ago Jason and I took a tip from some successful friends and started writing down goals and a game plan for the coming year. These aren’t the dreaded “New Years Resolutions” and I’m purposely waiting until the second week of January to write this blog post. It’s not about what day we start; it’s about making a plan for the year. In fact, we haven’t written our goals for 2012 yet—though we both have a bunch floating around in our heads. We’ve used this tiny notebook to record our goals for the past 3 years:

Some of our goals are on a personal level, some are career related, some are for our family and home, some financial, and some are big picture goals.

We didn’t hit all of our goals for 2011 and that’s OK. We set a lofty income target and we didn’t quite make it, but we did see a significant leap. We’ll try for that goal again in 2012. We had goals to finish some home projects like put a shade roof on the pergola and build a privacy fence around the patio and garden, which were completed. Others, like replace the plumbing mainline to the street, we decided to forego.

We had written a goal to start saving for our next vehicle. We ended up buying the Silver Bullet in cash. Yay!

We had planned to save up money for an adoption or for medical expenses if we had a baby. We ended up draining all of that money preparing our home to become foster parents. That works, too!

We had intended to save, save, save for our future (kids, vehicle, retirement) in 2011 but we ended up just saving a little (see above two points).

My favorite goal of 2011 was “Take more risks.” At the time, that was a big picture goal. We didn’t have anything specific in mind when the calendar page flipped over to 2011. Turns out we became foster parents, which was a pretty huge risk. We also bought a piece of land and put our beloved MCM ranch on the market with plans to build our dream house in 2012 with rooms for more kids.

It’s fun to look back at how much life has changed in one year. 2011 was a challenging, stretching, overall good year.

Here are a few of our (not too personal and/or financial) 2012 goals:

• move in and get settled

• specific goals for our retirement savings

• reopen our home as foster parents

Home-Free. That’s what I’m calling this combination of being homeless and debt-free. Last week we moved the rest of our belongings out of our house into storage and we closed on the sale of our sweet little green mid-century ranch. (I just updated my blog header, sniff, sniff.) I miss that house already. I’ve been driving past it everyday, just because, and I consistently have an impulse to check the mail or stop at the end of the driveway to pick up the paper. I have to remind myself, it’s someone else’s home now. We’re not really homeless. We have a home at my parents’ house for now, but it feels funny after owning a home for 7 years to no longer have a mortgage. Which brings me to…

We’re debt-free! We made a little money off the sale of our house. We put the first bit towards paying off the last chunk of our school loans and the rest we’ll set aside for the new house we’re building. I’ve been hearing for years, “The borrower is slave to the lender” but it’s still surprising to me how freeing it feels to no longer have any debts! And we’re soaking up the feeling because we’ll be taking out a construction loan soon. But you know, for the moment, we can shout a good ol’ Dave Ramsey style, “WE”RE DEBT FREE!” 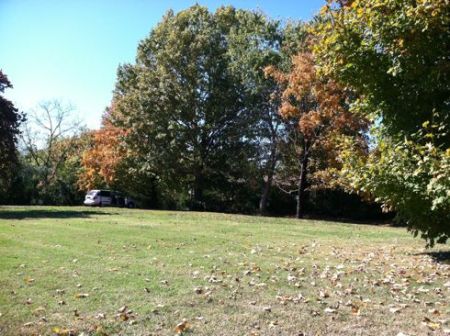