My niece was born yesterday afternoon! Her name is Eliza Kiley. Not the most flattering photo…she was still pretty fresh. I have better ones in my camera. But it is Phone Photo Friday after all. Eliza is absolutely adorable and I am totally smitten. She has soft, fuzzy brown hair and stunning, big blue eyes. I already LOVE being her aunt. We’re going to have lots of fun together. Uncle Jason and I even got to change a poopy diaper last night.

My creative and handy husband surprised me the other day with an outdoor project. He took the vertical wooden posts/pickets off of our deck (I don’t have a before picture but you probably know what I mean) and replaced them with modern, stylish metal railings. I don’t have any DIY instructions to share since Jason did this all himself but I know he used electrical conduit (the metal pipes) and drilled holes in the wood posts the same diameter as the conduit. If you want more information than that, let me know. 🙂 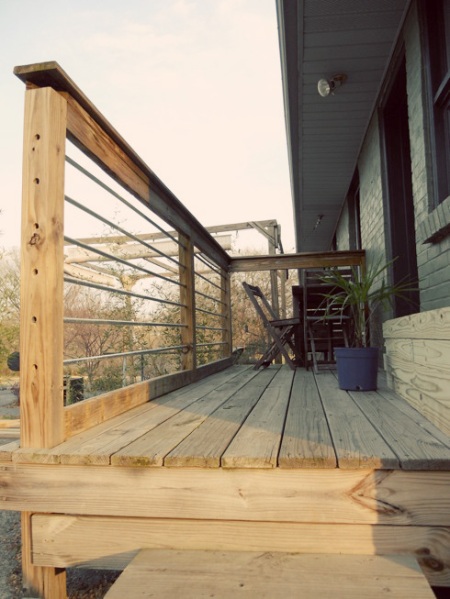 I love the new look! (And I love my smart, hard-working husband!)

Jason and I were working on some outdoor projects this weekend to take advantage of the beautiful spring weather we’ve been getting in Nashville. One project prompted Jason to dig out my grandpa’s old drill. This is probably from the 50’s or 60’s. It still works and is more powerful than our cordless Ryobi. Isn’t it a lovely color shade of bluish green metal?

By the way, that’s not a small drill—it’s big and super heavy—that’s a gigantic 4″ concrete bit.

Lately my breakfast of choice is a smoothie. I’ve been experimenting with many different combinations of fruits and vegetables and I haven’t found one I don’t like yet! Recently, the Pioneer Woman had a post about smoothies and after skimming the comments, I got some new ideas for smoothie ingredients. I thought I’d share my favorites.

Frozen Berries
PW used fresh fruit and ice in hers but we prefer to use frozen fruit. Fresh fruit can be frozen when it’s in season and out of season fruits are usually cheaper to buy already frozen. I buy bags of blackberries, strawberries or mixed berries (blueberries, raspberries plus the former two).

Frozen Bananas
I prefer the texture of a frozen banana in my smoothie to a fresh one. (Too slimy.) I peel and freeze my own bananas. You may be able to buy them already frozen, I’ve never looked. Frozen bananas are also great for cooking. Bananas also add sweetness to the smoothies.

Milk or Yogurt
I often add a splash of milk to thin out a thick smoothie or to lighten it to a more appealing shade of pink. It’s true. I’ve used yogurt for the same purpose in the past. Obviously skip this if you’re looking for a dairy free smoothie.

Applesauce
This was a suggestion I saw from a comment on PW. Applesauce can be used instead of milk or yogurt. Apples alone hurt my stomach so I like the idea of mixing applesauce into other recipes. Applesauce also adds sweetness.

Honey or Sugar
If I make a smoothie without applesauce or banana, I like to add sweetener. I prefer the taste of sugar but I try to be good and use honey instead. We always purchase local honey and supposedly having a spoonful of local honey everyday is good for building an immunity to local pollens and allergens.

Spinach
Add a handful of fresh green spinach to a smoothie. It’s undetectable!

Oatmeal
Another addition I’ve tried based on a comment from PW’s post. The first time I added a spoonful of dry oats I couldn’t taste them at all. The texture is a little bit gritty but with all the berry seeds it’s hard to tell. The second time I added way too many oats. That’s all I could taste. I gave Jason the other half and he couldn’t detect the spinach or oats. Maybe it was just psychological.

Carrots
The other day I was making a salad for lunch at the same time as I was making my smoothie so I threw in some matchstick carrots. I couldn’t see them or taste them in the smoothie at all.

Mango, Guava and other fruit purées
I’ve only tried mango so far, though I have guava in the freezer right now. I bought a package of 4 pouches of mango purée from Trader Joe’s. Running the pouch under hot water for a minute or two thaws it enough to mix into the smoothie.

Let me know if you have any other suggestions. If you try any of these, let me know what you think!

Working from home in my cloffice while watching The Office. Ironic?

From here on out, I’m going to refer to our friend’s house (the one needed painted, then was destroyed by a flood, then knocked down, and now has started to be rebuilt) as CBB 3.0. Why? Because that’s their nickname for their house. They have called their home Camp B_name-of-their-street_ Bottoms since they bought it. The original was version 1.0, completely renovated it into version 2.0 and now they’re building version 3.0. (Search for CBB for anything about this house, CBB 3.0 for the rebuild.)

Jeremy and Leila gave me the OK to share their progress with you. Their new home will be modern with some mid-century influence to fit it with the other 1950’s-1970’s houses in the neighborhood. The biggest challenge has been fitting a design into FEMA’s strict regulations. This had a major influence on the overall design of the house because the foundation had to be raised 4 feet from where it was before but the space below that foundation can not be living space. The solution was to make a garage and storage space under the house … kind of like an above ground basement. Here are some pictures of the recent progress: 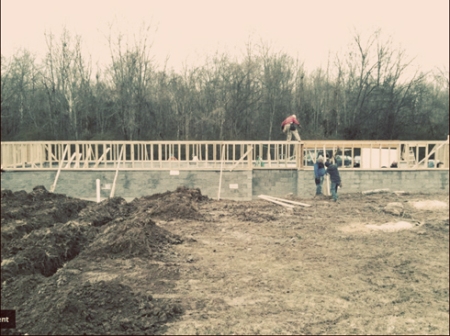 The foundation is 2/3 concrete block and 1/3 wood frame. 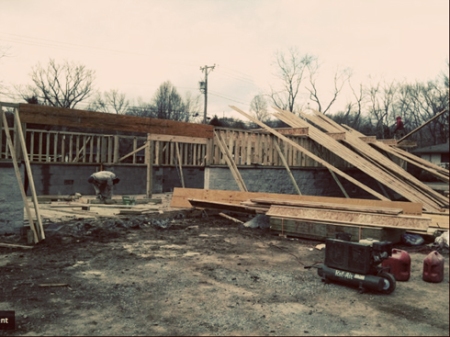 The large opening is for the garage door at the back of the house.

Flat roof graded toward the front of the house: 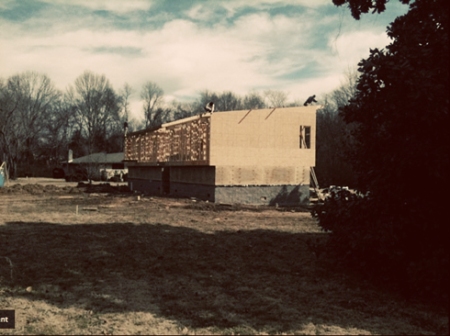 The build is moving so quickly, I can’t keep up with pictures. (Hopefully J is OK with me stealing pics off his facebook for now…it’s still dark in evening when I get home from work.) The roof should be complete by the end of this week. Target completion date: 1 year anniversary of the flood, May 1st.

Jason and I decided to not celebrate Valentine’s Day this year. It’s one of those commercial holidays that really rubs us the wrong way. People in relationships are obligated to demonstrate their love through sweets, gifts and fancy dinners. It can seem really forced. Then, all the single people, ladies mostly, tend to feel unloved.

We decided to let each other off the hook this year. I much prefer surprises and random gifts and date nights, anyway. I do like chocolates and flowers so I bought a bouquet of white mums at the grocery store on Sunday (which I do occasionally) and Jason snagged some leftover chocolates and heart candies at the store yesterday—50% off! You know we like a bargain.

The real reason we’re anti-Valentine’s Day is because while dates and gifts and cards have their place, real love is displayed in day to day interactions with each other. Monday turned out to be a perfect example of how Jason demonstrates that loves me. We took my car in to the shop in the morning and my sweet man drove me to work and dealt with the mechanic for me. He picked me up from work early to take me to my eye doctor appointment. I knew I wouldn’t be able to see to drive home on a bright sunny day with dilated eyes so he happily drove me. There was a giant mocha Frappaccino waiting for me when I hopped in the car. Once we got home Jason made tacos for dinner and did most of the clean up. All without a single complaint. That, more than any flowers or chocolates ever could, shows me how much my husband cares for me. He proves it to me all the time. I feel very blessed.

(Sorry about the lousy picture. I got a new phone and I haven’t figured out how to get the pictures to my computer yet.)

Tea on my Doorstep! 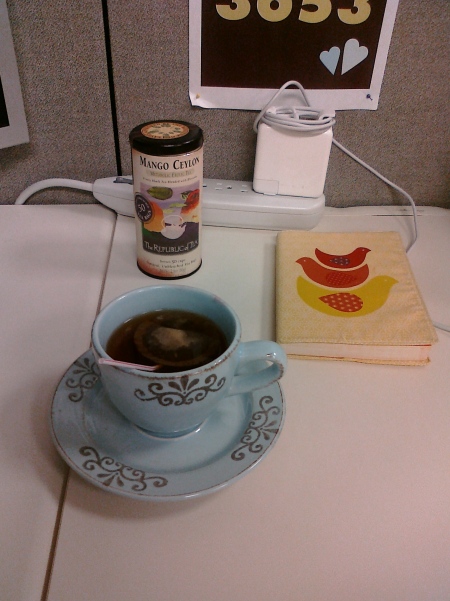 One of my favorite blog readers read about my trouble finding my favorite tea and sent me a canister as a surprise. I am so blessed! Thanks Mama, for making my cubicle time a little more fruitful! 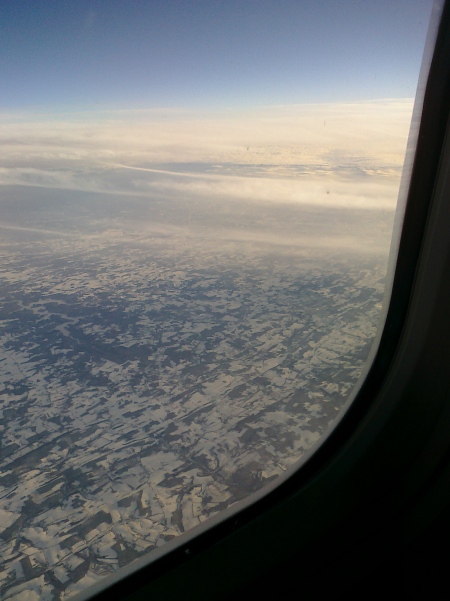 Last Monday Jason and I gathered around his brother Dan and his wife Ginger along with 7 of their closet friends to give them a baby shower. Not the gift kind of baby shower—we’ve already done that—this was a prayer shower. We all went around and prayed blessings over their baby girl, the upcoming birth, the new parents, their home and gave thanks for the gift she is and will be to our community of friends and family. It was relaxed and informal but a really special time for the parents-to-be. (I didn’t take any pictures that night but here’s another one from the maternity shoot two days before.)

Have you ever hosted a prayer shower or been to one?