Well things didn’t go quite as quickly as we had planned this week. The hold up has been getting the electric connected by the electric company, passing the city inspection and then getting the gas company to come out and set up the meter which involves a lot of people coming out and is completely out of our control. We didn’t have any problems, it just took longer than we were hoping and as I’m writing this on Wednesday night, we still don’t have gas (should be hooked up tomorrow) which means we don’t have heat, which means they can’t put the wood flooring in yet, which means the kitchen won’t go in until next week… which means… we probably won’t be moving in Thanksgiving week after all. The house should essentially be done, but there is a series of inspections the city has to do before we can get an occupancy permit and with it being a holiday week, it’s unlikely they will all happen before Thanksgiving. We can’t move in without an occupancy permit. The good news is that we were originally hoping we’d be in by Christmas and getting in by Thanksgiving was just a nice surprise. We don’t have any rush except excitement. Thank God we have a place to stay at my parents’ house for as long as we need.

So, what did happen this week? The HVAC was installed along with the hot water heater. We got power! At the point of me writing this, about half of our lights are installed. Door handles were installed. Jason and I took the master key on Tuesday night and had new specialty keys made for ourselves. We also picked up some LED lights to put up on our light shelf, but we need to get more. We guessed on the 100 lights/33 ft. set.

I had to run out to the hardware store to grab a couple of lights for closets that we had forgotten about. Jason was out of town and happened to have horrible reception while I was at the store so I couldn’t even consult with him. This was the picture I sent him to say, “I got these. OK?” 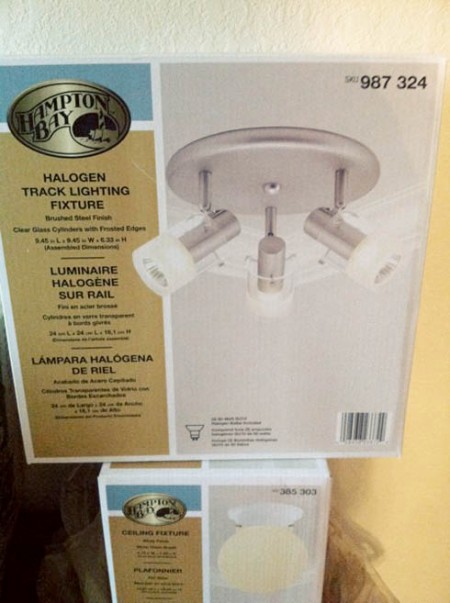 Outlets and some fixtures are in. 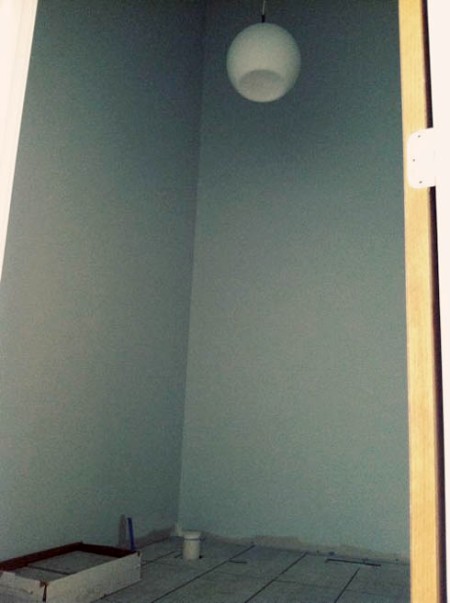 We were going to get fans for every bedroom but we decided to save money and get some cheapos for now and we’ll replace them one at a time later on. 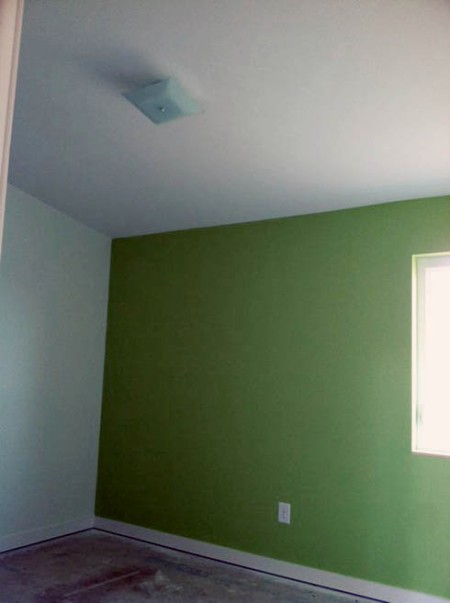 We still got a nice fan for our bedroom and we’ll have one in the living room as well.

This is a silent “door bell” in Jason’s studio. Remind me to tell you about that later. 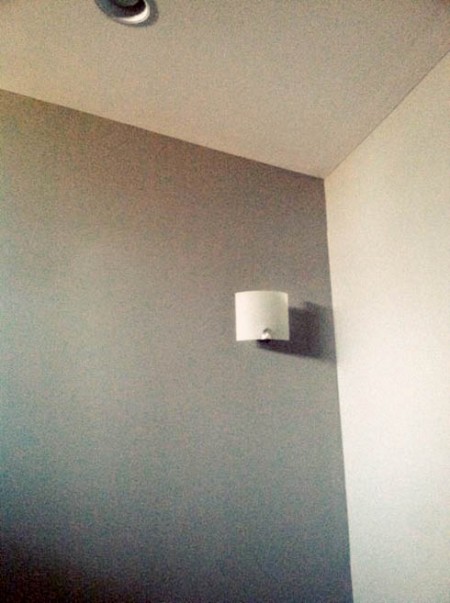 The HVAC looks like it was custom painted to match our house. It was not but that would be cool, wouldn’t it? 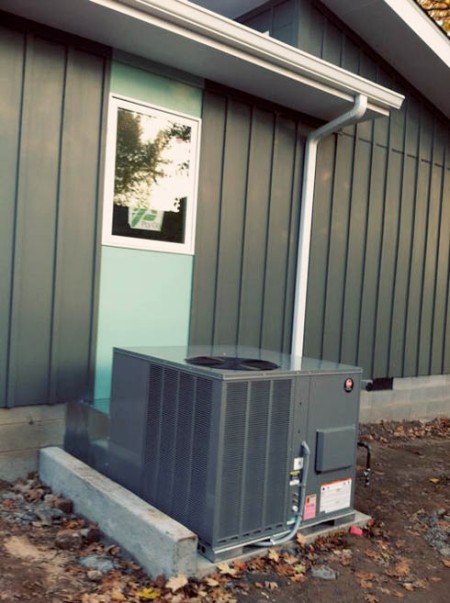 We like dimmers. We’re going to have a lot of dimmers.

It was foggy one morning while I was walking Lucy and I took this pretty autumny photo. 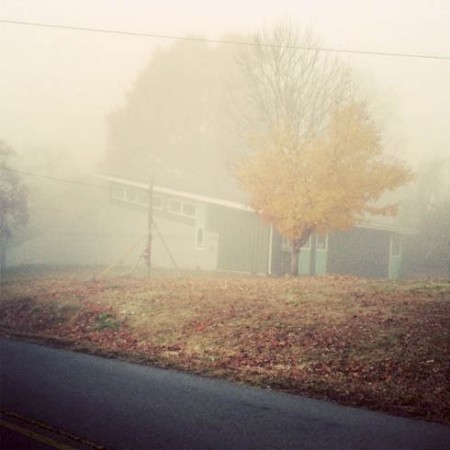 Lights! Jason, who is a perfectionist (I love that about him!) is straightening one of many crocked door handles.

We got these squarish door levers and it’s really noticeable if they’re a little bit off.

Jason is checking out the hall bathroom.

This is the first time we’ve really been able to see the tile and paint color because this is the only windowless room in the house and it has always been dark until now. That’s precisely why I wanted a light airy color on the walls (SW window pane) and I’m really happy with how it goes with the light gray tile and white tub (we’ll also have a white toilet, white vanity, white sink/countertop.)

Only 1 of 4 lights was installed so it’ll get a lot brighter in here. 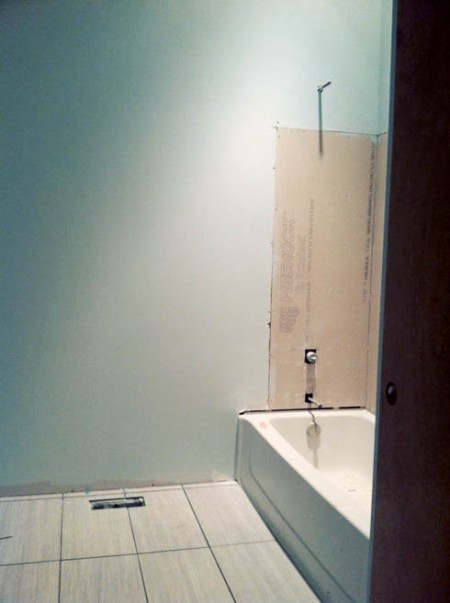 We turned on all of the lights that we could and ran back outside in the cold to see what it looks like lit up. We have lights in the eaves around the house so once they’re installed it’ll really light up at night.

We have 2 workable outside lights on either side of the garage. 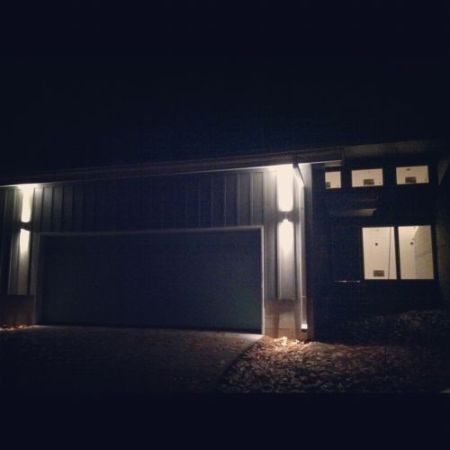 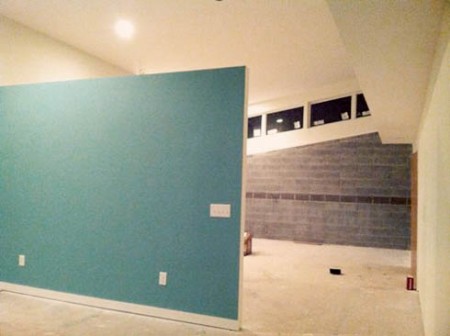 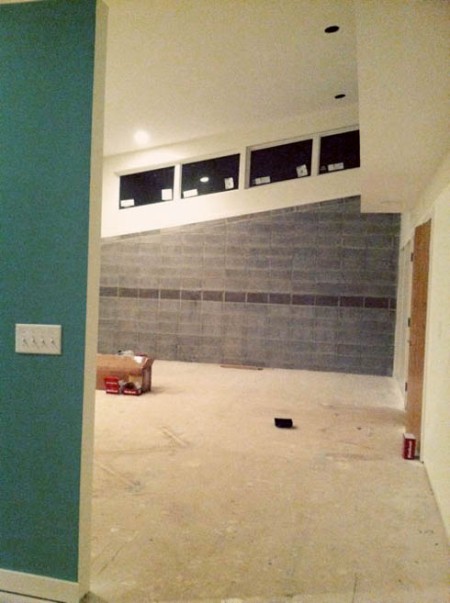 This entry was posted on Thursday, November 15th, 2012 at 7:00 am and is filed under Art, Art: modern design, Art: new home build. You can follow any responses to this entry through the RSS 2.0 feed. You can skip to the end and leave a response. Pinging is currently not allowed.