Last week the ground was dug and leveled for our new home and the concrete was poured for the footers (the base that the foundation blocks will sit on). I had to get a phone replacement and I lost a few pictures so almost all of these are from Jason’s phone. I took this one of Precious. We take walks down to the new house several times a day. 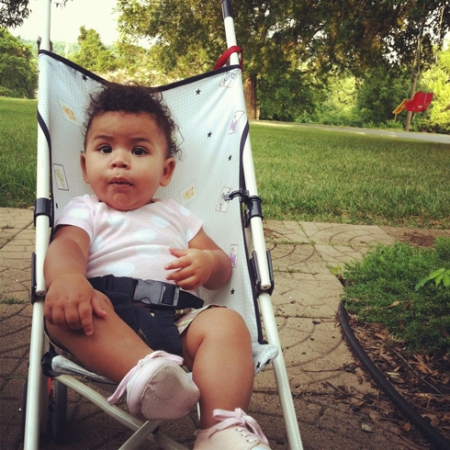 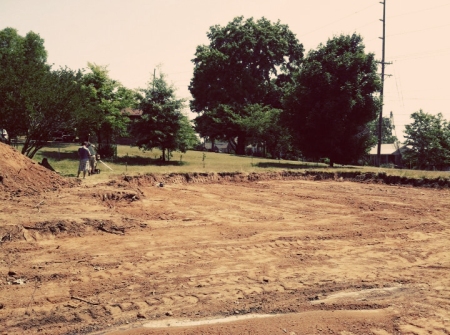 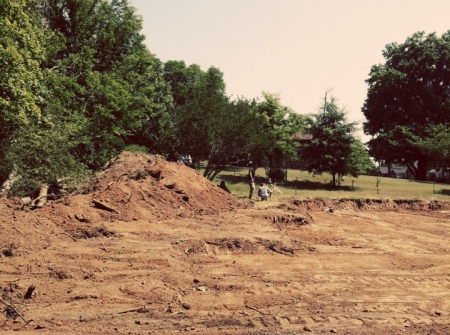 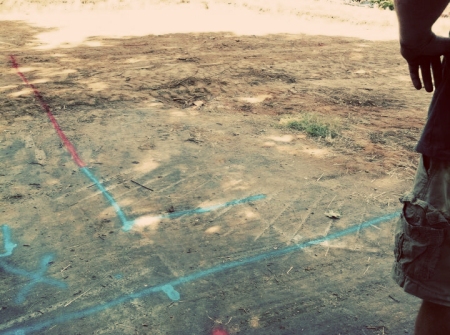 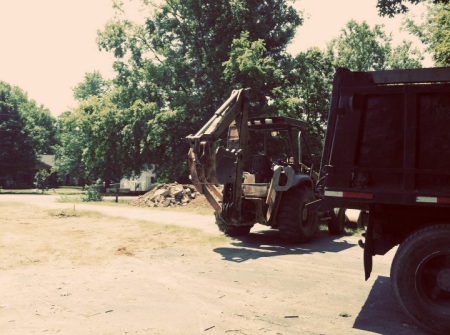 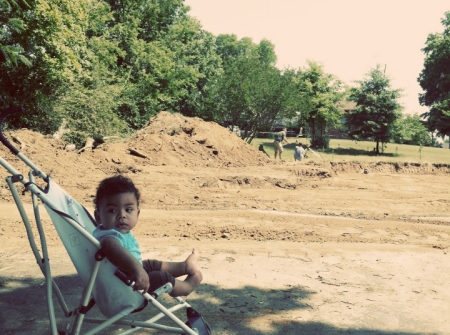 There was a lot of junk buried from the previous house. I don’t know if I’ve mentioned it before but the house that was originally on this lot had a fire and was demolished. According to the city codes, they’re not supposed to do this…ahem…although, our contractors and the footer guys didn’t seem terribly surprised. It’s not usable as fill dirt so most of it had to be hauled away. 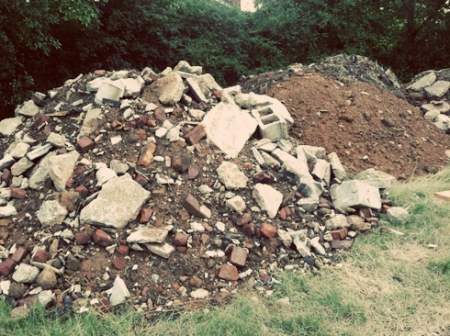 After the ground is leveled, they did trenches for the concrete. There is a trench for every load-bearing wall as well as some square pits for support pillars. Our house will have a crawlspace, not a basement, in case you’re wondering why its so shallow. Our ground is very rocky in Tennessee so basements are not very common. (Unless it’s a hillside property, blasting is usually required to get deep enough into the rock for a basement. $$$) We considered doing a slab instead of a crawlspace. I’m happy to explain why we decided on crawlspace if anyone really cares. Otherwise, I’ll spare ya the details. 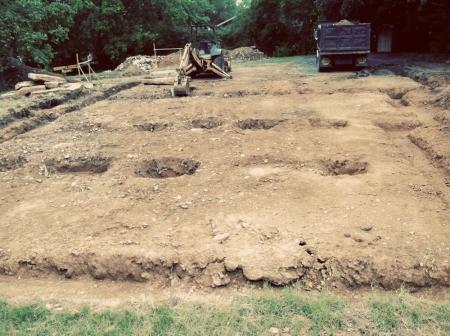 Once the trenches are finished, rebar is set in place for the concrete. I learned the difference between concrete and cement last week, in case anyone else is interested. Quick answer: cement is an ingredient of concrete. 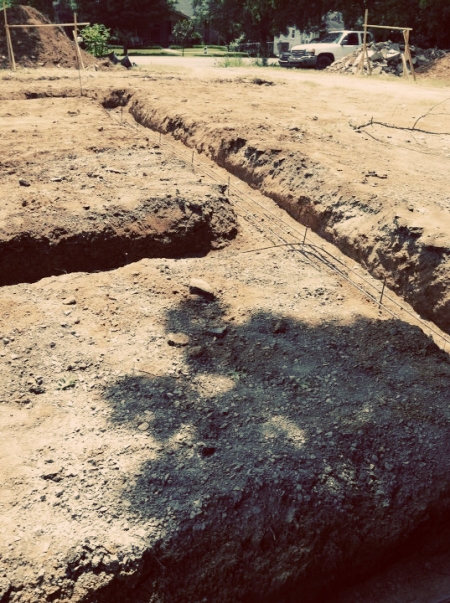 Speaking of, here comes the concrete truck! On my birthday. Biggest and most expensive birthday present I’ve ever received! 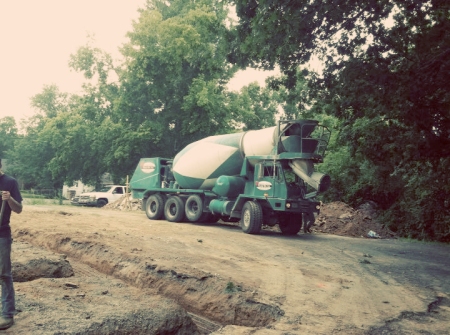 It was about 95 degrees out that day. 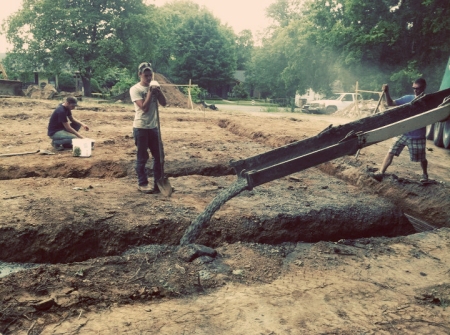 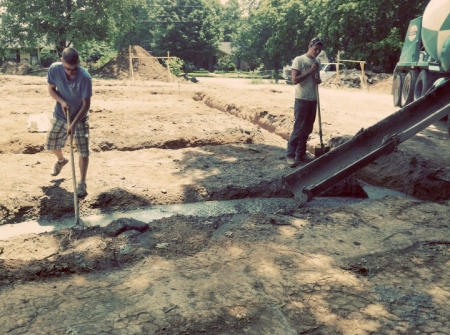 This was taken after the first truck load. It took about 2.5 truckloads of concrete all together. Later on in the building process the concrete truck will be back to do our garage and back patio. 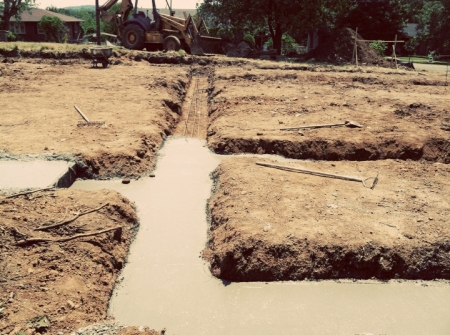 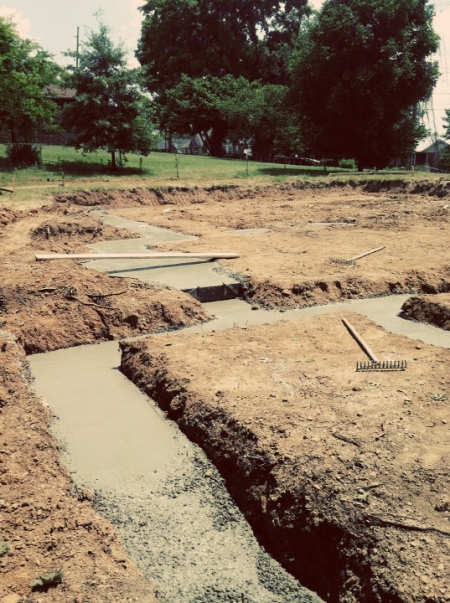 On Thursday the concrete blocks were delivered. 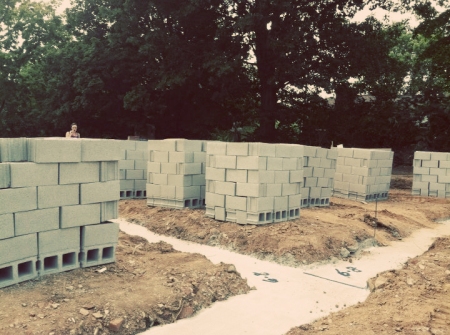 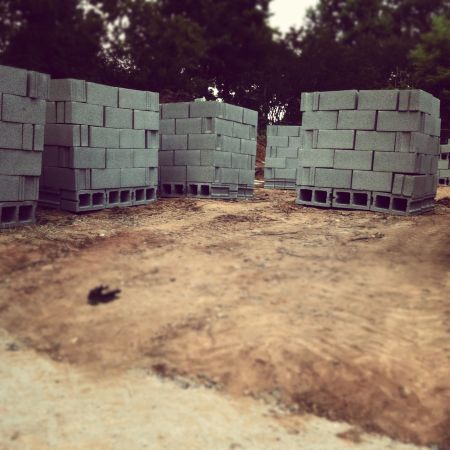 This week, that block should be going into place around the foundation and the front of the house. It’s so exciting!

This entry was posted on Monday, June 25th, 2012 at 8:00 am and is filed under Art, Art: modern design, Art: new home build. You can follow any responses to this entry through the RSS 2.0 feed. You can skip to the end and leave a response. Pinging is currently not allowed.

One Response to New Home Update