For Better or For Worse

Today is a special day. I wouldn’t normally pay much attention to this date but since I just finished sharing Our Love Story, it was on my mind…it’s the 13th anniversary of our first date. Thirteen years?! Can you believe that? That makes me feel old and I’m only 27.

Jason and I have a really good marriage. We’re best friends and have been for 13 years. But, if I can be perfectly honest, we’re in this transition time right now, limbo, semi-homeless—and it can be…stretching. More than I want to admit I’ve taken out my frustrations on my dear husband. I’m generally pretty easy going, sweet, quiet (I’ve been told) but believe it or not, behind closed doors I’ve snapped at my husband and be an all-around jerk plenty of times. I’m ashamed of how selfish and careless I have allowed myself to be at times towards the one I love the most.

In case anyone out there has the impression that we’re perfect, I just wanted to set the record straight.

The other day I had been particularly snarly at Jason as we prepared financial documents for the 4th bank. He cares too much about me and our relationship to let that kind of misbehavior get swept under the rug. He holds me accountable for my actions—and I do the same for him. Eventually, I was apologizing and asking him to forgive me, again, which he did. The next morning, he left a very generous love note sitting on my laptop before he left to go on the road for the weekend. I won’t post the photo I took of it but it was something about what a great wife, woman and mother I am—generous because it’s so not true but I’ll accept it as him calling what’s not as though it was, in a prophetic, blessing kind of way. I want to be the kind of woman he says I am.

We’re definitely not perfect, but we’re committed to making it work, to forgiving, to changing, to doing it better next time. Later that afternoon, my Mothers Day gift arrived with the mail. It was a few days late because the Etsy seller had been out of town but I didn’t mind. (I knew it was coming.) We call our daughter Ali-gator and I love the idea of a piece of alligator-themed jewelry to remember my first Mother’s Day as her mom. I love it!

On the ring finger of my left hand, I have the engagement ring Jason gave me when we were still kids (17 and 19) and the band from the day we vowed we’d never give up on each other, for better or for worse, for richer or for poorer, and all that good stuff. On the ring finger of my right hand, I have a silver alligator in honor of our precious daughter. It’s a subtle, clever, unexpected way to celebrate my unconventional motherhood. Every time I look down at my hands I’m humbled and awed that God would allow me—far from perfect me—to be Jason’s wife and Ali-gator’s mom. 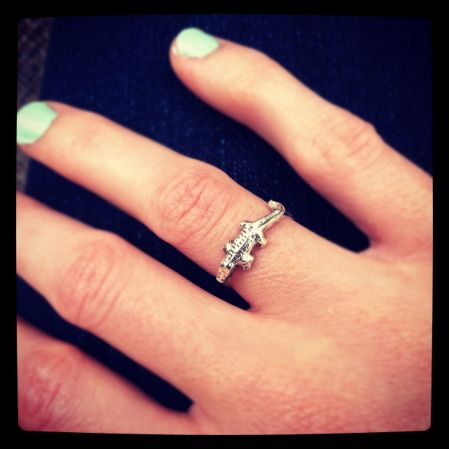 This entry was posted on Tuesday, May 22nd, 2012 at 8:00 am and is filed under Family, Family: Me. You can follow any responses to this entry through the RSS 2.0 feed. You can leave a response, or trackback from your own site.

3 Responses to For Better or For Worse