In with the Old, Out with the New

For the past five years—ever since we bought our mid-century modern ranch—Jason and I have been buying old things to replace our new things. We found a set of vintage end tables at a thrift store, came home and put our new-ish IKEA tables on craigslist.  We found an old dresser on the side of the road and gave our new-ish dresser away to some friends. And we kept going and going. Most recently we traded in our new-ish sofa and bed frame for 1950s sofa and bed frame replacements. It’s not just because we love the style of the vintage replacements; but also because of the quality. Things from that era were made to last. Why buy new, more expensive furniture that doesn’t stand up over time when we can spend less on vintage wares that just need refinished or cleaned up?

It’s not a mid-century car. We’re not that brave yet. (Maybe someday we’ll have something as sweet as this 1963 Falcon!) We got ourselves a 1988 Mercedes-Benz 300SE. Quite a contrast to the all practical suburban workhorse we bought last spring, our Silver Bullet. 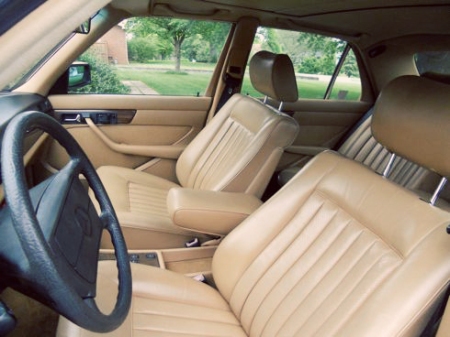 Fun fact: when this car was new, it cost 3x as much as the home Jason’s parents bought in the 80s. And much like furniture from the golden age, this car was built to last with style and quality would couldn’t find in a new-ish car…at least not for the same price.

I’m not going to lie…we were sort of wooed by the design. We love the boxy navy blue exterior and the tan leather interior—and it’s in amazing condition for the age. It has all kinds of fun buttons that we’re still figuring out, a huge sunroof, a thermostat climate control dial, ashtrays and cigarette lighters in the back doors.

In with the old…that means it was time to kick out our new (10 year old) Ford Focus. It’s a little bit sad to say goodbye to the ole’ Green Meanie. It’s taken us a lot of places in the 8 years that we owned it and it’s been a good little car, but it is time to move on. We’ll let someone else eek the last couple years out of it.

This entry was posted on Wednesday, April 18th, 2012 at 8:00 am and is filed under Art, Art: modern design. You can follow any responses to this entry through the RSS 2.0 feed. You can leave a response, or trackback from your own site.

2 Responses to In with the Old, Out with the New