It’s been two weeks and I feel like I should have something really profound to say by now. But I don’t. Little firefly left us on July 3. I happened to have scheduled a vacation day that day. My mom and I took the kids to the zoo in the morning. We got back home for lunch and I tried to soak up every last minute I could with our sweet baby boy. Knowing he was slipping through my fingers, I felt like documenting every moment, trying to stop time. His new baby smell… How I wish I could have bottled it up somehow.

His belongings ready for his case worker to arrive. 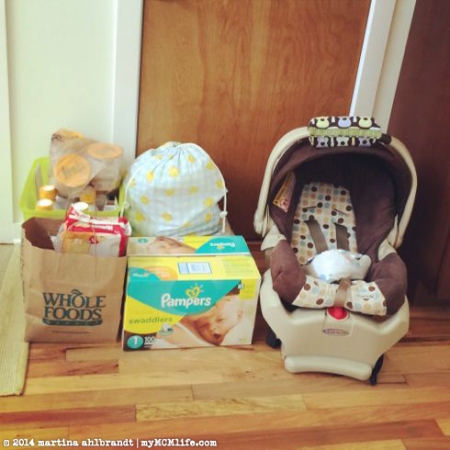 Ali joined in the documenting.

I sure do miss the little guy. He was such a blessing to have at our home. I’m really thankful we were able to care for him his first 4 weeks out of the NICU. We worked really hard to feed him his high calorie formula around the clock, keep him healthy and shower him with plenty of love and prayer. It was very hard to let go after being so protective over him but in the end we had no choice but to let go and trust. I’m still praying daily for his health, provision and protection. I will forever love our tiny Firefly boy.

We found out after court on Monday that Firefly will likely be returning to his biological parents tomorrow. I don’t feel confident that it’s the best thing for him. With our last two placements (Buzz and Bee) it was much easier to let go, knowing they’d be going back to good care. I just feel like there are a lot of unknowns this time plus he’s still so small and vulnerable. It’s completely out of our hands. Would you pray with us that Firefly’s safety is a top priority for all involved, that he gets good care and lots of love? He’s gained almost 3 pounds in his 4 weeks with us but he’s still just 6 weeks old and not quite to his due date. I’m really thankful that we could be there for him from his release from the NICU until now. I think we gave him a good strong start in life. We sure do love this little guy and all three of us are going to miss him a ton. I’m wavering between sadness, anger, peace, wondering what’s next for our family, and fear for his safety.

I’ve been singing this song nonstop. Pain is no measure of His faithfulness…

Could you pray for our little Firefly today? He has a hearing this afternoon that will determine whether he stays in foster care for now or goes home to his biological parents. Please pray for wisdom and discernment for the magistrate, and peace and patience for his parents.

Firefly turned 1 month old last week! Baby boy is eating well and growing fast (though still tiny and still not to his due date). Around the start of his 4th week he discovered his voice and started experimenting with crying. He doesn’t cry much, thankfully. He’s a very peaceful and pleasant baby. In fact, around the start of his 4th week he also started smiling! It’s not terribly uncommon for babies to smile at 4 weeks but with him being so premature, I’m especially surprised and impressed. The first time he did it I was saying, “Do you know how loved you are!” He’s now smiling quite often when he hears our voices or tickle his chin(s) and of course, the reflex smiles too. He likes to be swaddled. He’s doing well with tummy time. I’m doing just a couple minutes at a time so he can get used to the position but since he falls asleep quickly, he doesn’t stay on his belly too long. He often rolls onto his side to sleep and loves to have his hands up by his face.

I don’t think I’ve mentioned previously that Firefly is half-Hispanic, however he looks like he could be Jason’s biological son with reddish blond hair and very fair skin. We lovingly call him our little red-headed Mexican. Our daughter is also half-Hispanic so that’s kind of fun. I’m wondering if that played some part in him getting placed with us; perhaps we came up in their system as a match because we have another Hispanic child. But, as mentioned, they look nothing alike. Alianna is completely smitten with him (just like us) and is being an awesome big sister. She loves to pet his head and snuggle up next to him. She talks to him and kisses his cheeks and he smiles. 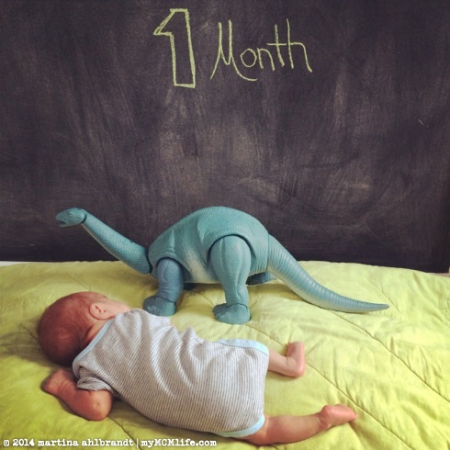 The Brachiosaurus is one of Jason’s Definitely Dinosaurs from his childhood collection, for scale. I’m hoping I can use it to show his growth every month.

I’ve been storing an olive green sheet for years, planning to sew it into a baby sling. Slings are great for a tiny newborn, which we’ve never had until now. In fact, Firefly is too small for our Infantino baby carrier or Moby wrap (or the ErgoBaby carrier I’m drooling over!). I found this sling tutorial via Pinterest and whipped up a sling for Firefly one Saturday afternoon. It’s perfect for him and I love the color.

While I had the sewing machine pulled out, I decided to sew some baby tube socks and mittens for the little guy using upcycled old socks. His little hands and feet are so small that baby mittens and socks dangle off of him. I used this trusty tutorial from Made By Joel, the same one I used 3 years ago for baby Alianna.

I love these ones made from a pair of Jason’s socks that got holes in the bottom. Baby business man socks. I’m tempted to pull socks out of Jason’s sock drawer to makes some more…

I spent another afternoon nap time sewing Firefly some baby pants from shirt sleeves. (Just like these upcycled pants like these I made for Ali.) They’re fairly easy and free if you have some old sweaters, sweatshirts or long-sleeve shirts you don’t need anymore. Jason had a striped hoodie that shrank in the wash—so much that it didn’t even fit me. I’ve been hanging onto it for such a time as this. I made Firefly some pants with room to grow since they’re really too warm for summer in Nashville. I also made him some lightweight pants from two gray long-sleeve t-shirts that I was no longer wearing. Since the pants turned out pretty well and I still had a lot of shirt leftover, I made him a hat and a pair of simple tube socks. The socks are perfect for his tiny feet but I’m guessing they’ll only fit for a couple weeks until his legs get more chubby. I’m glad I didn’t have to spend a penny on them. 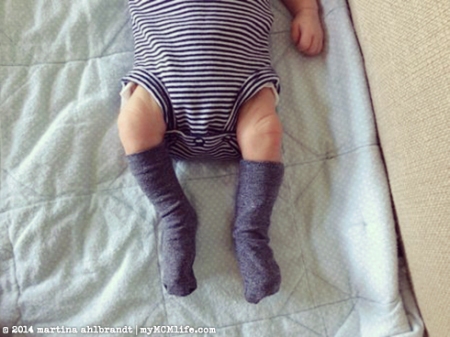 It doesn’t seem possible but the calendar cannot be denied: it’s been two weeks since little preemie Firefly was delivered to our house. He is a joy and a delight, a bringer of light into our home. He’s steadily gaining weight, sleeping well and staying healthy—that’s all he needs to do right now. He’s eating on a 3-hour schedule. Jason and I have worked out a lovely system where Jason stays up until 2:30am to finish the last feeding and I get up at 5:00am to give him his first bottle of the day. We’re like ships passing in the night but it’s “teamwork at its finest” as my friend Leslie put it. We’re a bit tired but all in all things are going really well at home. I wish I could talk more about his case but of course the details of that are confidential. I’ll say this, he’s secure in our home until the next court date, June 30, for sure. That’s all I know at this point, though we and every DCS worker have opinions and gut feelings on what we think will happen. He’s our fifth placement and I’m amazed at how different each of the cases have been.

Alianna is absolutely loving having baby boy around the house. She’s convinced his name should be Donut. Sometimes she calls him Baby Bwudder. The other day Jason and I were working on a chicken-related project outside. Ali was with us and Firefly was in his crib. Ali slipped back into the house and when we went to find her she was IN his crib with him, just lying next to him and “petting” his head, as she loves to do. She’s on the brink of three-years-old so we’re still having to remind her often to be gentle with his head, not to touch his mouth or try to open his eyes, etc. But, I have to say, she’s being so sweet and mature with him. She’s come along way since November when 6-month-old Bee arrived at our house. (Ali was 2 years, 4 months at the time.) It’s really special to see their bond and I do hope he sticks around for a while. We all love him a lot. 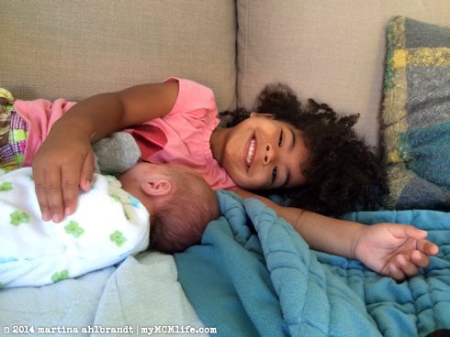 It’s firefly time of year in Nashville. Every evening as the sun is going down, we finish up our popsicles or ice cream cones and scramble around the yard trying to catch the little lightning bugs to put in our mason jar. I was a summer baby and I’ve always loved summer.

Things have been pretty quiet around here. I just finished up some big deadlines at work and a freelance project that had been on and off for months. On Thursday afternoon when Ali was napping and I was all caught up on work, I stepped out onto the back patio to enjoy a cup of tea. It had been rainy so I stayed close to the backdoor where it was dry and I tossed sliced raw almonds to my silly hens. It was a beautiful, restful moment. I wanted to capture it. Ashley Ann wrote a post a few months ago about drinking coffee (or tea) with two hands, savoring it instead of multitasking. That’s what I was doing.

Right in that moment of peace, my phone rang. It was DCS placement asking if we could take a newborn baby boy who was being released from the hospital that day. Without hesitation, Jason and I said yes. Firefly arrived at our house 90 minutes later. He’s the tiniest little person I’ve ever met, a preemie at just 5 pounds. He is precious and delightful. He smells like Heaven. He sleeps about 23 hours a day. He is by far the easiest foster placement we’ve ever had. We have no idea what the future holds for him and us at this point. I’m savoring him, holding on with both hands, just like that warm cup on a rainy afternoon. 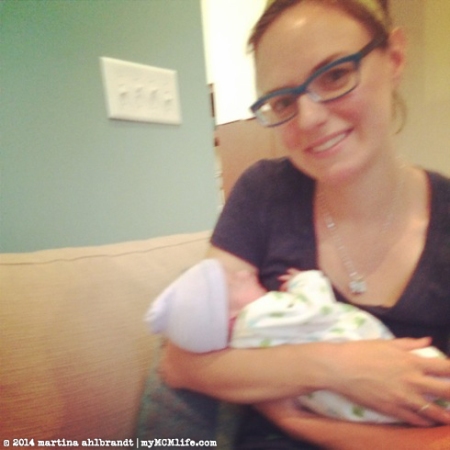 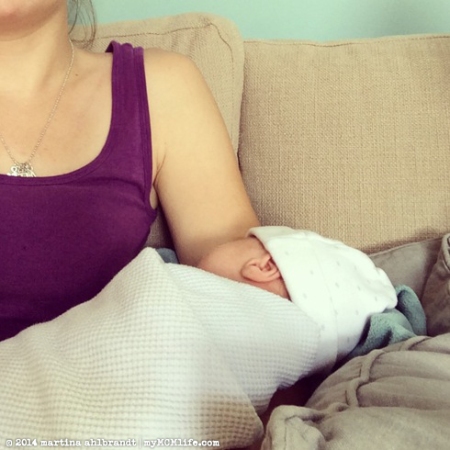 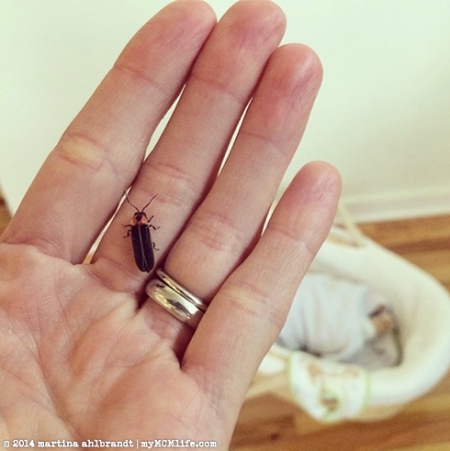