Getting my three-year-old out the door in the mornings can be a slow process. Even when I think we’re on time, those last few steps of using the bathroom, putting on socks, deciding on shoes, getting into the van and carseat can take much longer than I expect. A couple months ago I realized I should start doing some big sister training exercises to help our out-the-door process get a little quicker before little Isaiah is added into the mix. (I’ve had a combined practice of 7 months of having two children to get ready in the mornings from our last four foster children so this is not all new.) With Ali approaching four years old, she’s capable of much more independence than we often expect or require of her. Undressing and dressing herself, including shoes and socks, was the biggest process I wanted to help her master before Zay’s due date. I made a sticker chart with a list of tasks, including some she was already routinely doing (staying in her bed all night, putting her dirty clothes in her laundry basket), and those that I wanted her to work on. It took her two months to fill the chart because we forgot about the stickers most of the time! Especially the ones that happen in the rush as we’re going out the door. But the great news is that she’s capable of doing everything on this list now. (Getting her to do it quickly and without requesting help is still a work in progress…) She earned the prize of her choosing: Candy Land. I’m really proud of her. She’s so excited to be a big sister to Isaiah and to do all of these “big girl” things without help. 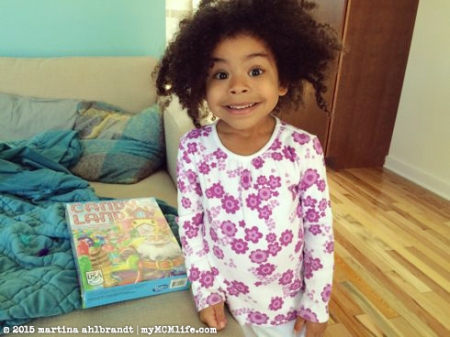 [Disclaimer: I typically do “hair night” every other day…this was after skipping it for two nights…4 days without detangling and moisturizing. Don’t judge me! I’m 9 months pregnant and my husband was out of town for several days! 😉 ]