When we finalized Ali’s adoption we changed her name. It was a slight change to her first name because we really liked her name. Well before we had even considered foster care we planned on naming our first daughter Anna Mae. Jason and I both have/had grandmothers named Anna. Mine was Anna Maria. His is Anna Mae. We realized while debating about what/if to change her name that we could modify it just a tad and incorporate our planned name into her existing name. Alianna Mae Ahlbrandt.

Jason’s grandmother Anna Mae Ahlbrandt lives in Erie, Pennsylvania, where we’re from. We don’t get back up there often and it occurred to us that our opportunities to introduce Alianna to her great-grandma could be running out. Last Friday these two finally had a chance to meet. They probably won’t remember this meeting but it was important to me that we captured it in photographs so we can show Ali in the future. Great-Grandma has dementia and her short term memory lasts only about 5 minutes. She asked us over and over again who we were. She really seemed to enjoy Ali and Ali did very well braving this unfamiliar and awkward situation. When we talked about it afterward, Ali’s impression was that great-grandma was sick and she was crying. She was not crying—in fact, we was smiling, joking and singing most of the time we were there—but perhaps Ali was picking up on a deeper emotion. I’m thankful we could do this and capture the moment forever. 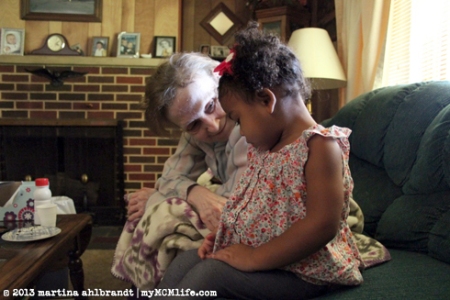 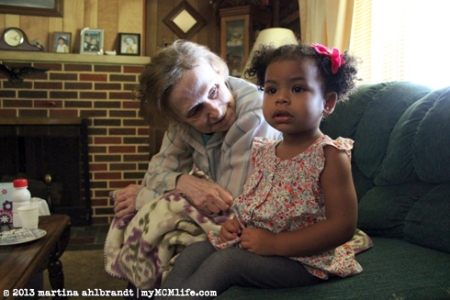 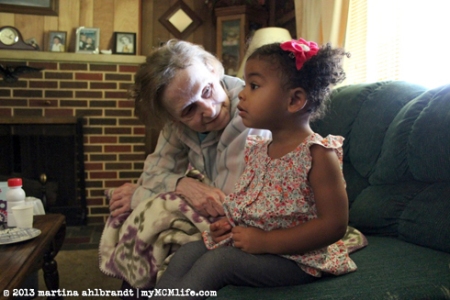 I’ll share about the rest of our trip—Ali’s first time to the place we grew up—in my next post.

This entry was posted on Wednesday, September 11th, 2013 at 12:20 pm and is filed under Family, Family: Extended Family and Friends, Family: Precious/Ali. You can follow any responses to this entry through the RSS 2.0 feed. You can skip to the end and leave a response. Pinging is currently not allowed.