While we were out of town kid-free Jason and I had to find places for Ali and Buzz to stay, of course. Ali was easy. My parents were willing. Since we lived with them for 10 months last year and Ali goes there all the time, it was a pretty easy transition for her. We did a lot of FaceTime and sending photos and videos back and forth, which helped a lot. I’m so thankful for technology!

Buzz was a little trickier. It was too much to ask anyone to watch both kiddos together (I totally understand!) so we needed to find another home for Buzz to stay. Our new family case worker was awesome about sending out an email and locating a family that was willing and available. The other family’s case worker sent their contact info with a little note “heart in the right place” next to their names. I can’t tell you how much peace of mind that gave me! I talked to his respite foster mama at length before the trip and sent her a detailed list of his routine and likes/dislikes. They were grateful for all the info and I was thrilled that they cared enough to ask in advance about his favorite foods, books, activities, etc. She sent me reports and some photos during our trip reporting that he was doing great and such a sweet boy. She also kept in touch with Buzz’s mom through texts, pictures and videos lik we usually do. Buzz’s mom and I both hated for his sake that he had to be away from our home for 9 days, but it went as good, if not better, than we could have hoped for. It was a little rocky transitioning back to our house the first day. It was hard to interpret his emotions…sad, confused, scared…but I’m not exactly sure why. We did our best to explain to him everything that was happening and what to expect next. By the next day, he was pretty much back to his usual self. It sounds like he didn’t talk much at their house but he came back with some new words and expressions, and it’s been fun to hear what he learned: “that way!” “wait!” with his hand held out, “oh ok.”

I had planned to have an extra day of staycation when we got home before returning to the work/daycare routine but we ended up with 2 days (because Jason opted to drive through the night!) I’m really glad we had that time to transition back to a family of four again. Both of our kids caregivers did ALL of their laundry before pick up so I only had 3 loads to do when we got home, rather than 4 or 5. Thank you, thank you!

I looked at tacky over-priced Key West souveniers for the kids at several shops and just couldn’t bring myself to do it. We stopped at IKEA in Orlando on our way home and I picked out a big stuffed animal for each of them…or in Ali’s case a stuffed vegetable. She loves broccoli so I thought it would be funny to get her a big stuffed broccoli. There’s a video of her showing off Miss Bocki on my Instagram feed. Buzz loves dogs so his toy was an easy choice, too. He acted completely uninterested in it while we were still at his respite house but then fell asleep holding it on our drive home and has slept with it every nap and night since then. I asked him if dog has a name and he said “Woof Woof.” 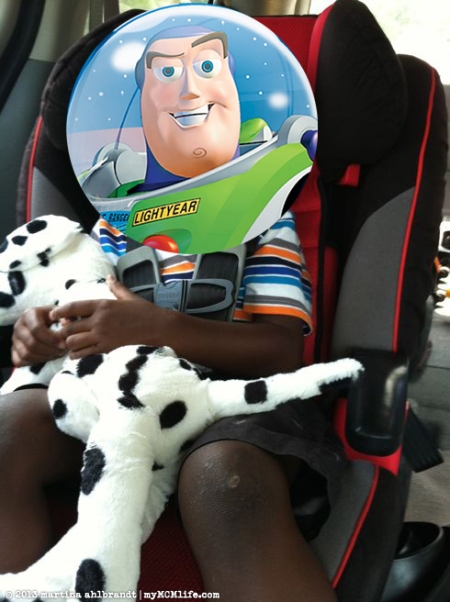 We got a few things for ourselves, too. Some of it won’t appear until future posts when it’s assembled and/or photographed. These were easy, though. New towels, bath rug and shower curtain for the hall bathroom:

This entry was posted on Tuesday, July 16th, 2013 at 6:00 am and is filed under Art, Art: interior design, Art: modern design, Family, Family: Buzz, Family: Precious/Ali. You can follow any responses to this entry through the RSS 2.0 feed. You can skip to the end and leave a response. Pinging is currently not allowed.

2 Responses to Respite and IKEA