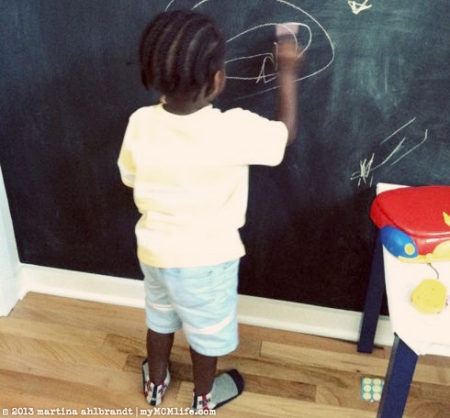 Friday night after the kids were asleep Jason and I started preparing our house for our first party—a house warming party! We’ve been in our new home for 6 months but it took us this long to find a weekend that worked for both of us and to feel like we were settled enough.

Since court was pretty uneventful on Friday, we had a visit with Buzz’s mom Saturday morning at a newer city park a few miles from us. This is the first time we had had a chance to check out the splash pad. It’s pretty great and it’s totally free. Thank you, Nashville! This is the only picture I took because it was hard to stay dry. Buzz is in the background by Ali’s forehead. He LOVED it! Ali wasn’t so sure.

I gave the kids early baths on Saturday since I knew they’d be up late at the party. When Buzz saw that I was putting a dress on Ali, he ran to his closet to pick out a nice shirt. I helped find matching shorts and then he picked out the flip flops for both of them. I had my new Pandora station running and they decided to dance together. I took a video to send to Buzz’s mom. I wish you could see the huge grin on his face. It’s very similar to Buzz Lightyear’s grin here:

This was at the end of the party when just our BFFs were still there. We attempted to get a typical smooch shot of Ali and her buddy Jaron but they were too quick (although there was kissing a-plenty!) It was way past their bedtime and these two were getting so silly, especially Buzz. Again, I wish you could see his huge grin. 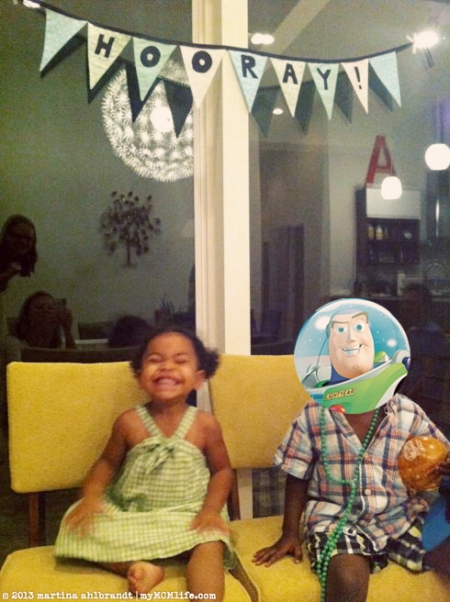 Buzz got into a rare kissing mood…he kissed me, our friend, Jason…and then I suggested he give Ali a kiss. 99% of the time he refuses affection from her. She’ll sneak up behind him to give him a hug and he squeals and tries to get away. This time he gave her a big, long kiss! They really do love each other even though they drive each other (and us) nuts most of the time. Like brother and sister, I guess.

When I finally crashed into bed, I had to stop to take a photo. This room has been the most neglected design-wise. We finally got new curtains and hung them the day before the house warming party. We had tubs of out-of-season clothes and piles of extra blankets that I finally packed into our closet. (Why didn’t I do that months ago?!) It looks so much more clean and relaxing now. I’ll be posting some more about this room as it progresses. We picked out new bedding but haven’t purchased it yet. After that, we’ll be working on night stands, lamps, an accent wall, and artwork. 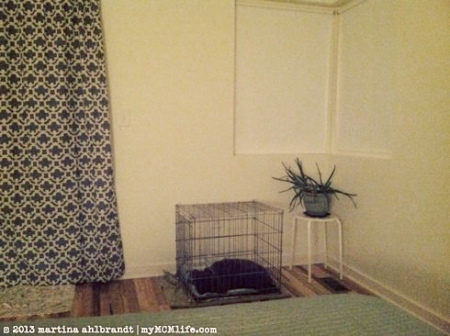 This entry was posted on Tuesday, June 25th, 2013 at 6:00 am and is filed under Family, Family: Buzz, Family: Extended Family and Friends, Family: Precious/Ali. You can follow any responses to this entry through the RSS 2.0 feed. You can skip to the end and leave a response. Pinging is currently not allowed.