A repost from East Nashville Atomic

About six months ago Jason and I were browsing around at Southern Thrift. The left side wall is lined with junky vases, mugs, plates, picture frames etc. We picked up a platter with a starburst design. Amidst all the kitschy forgettables it didn’t look like much. It had some wax or something crusted on the front and a chip out of the underside. It was only $2 but we debated back and forth for a while, not wanting to pay even $2 for something if it was just going to clutter our house. (We’re pretty minimalist. And cheap.) Eventually we decided it was cool enough to bring home. 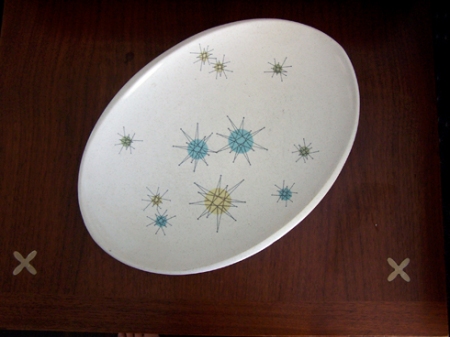 One Saturday morning maybe two months ago, we were watching Good Eats on the food network. I don’t remember what food he had made but Alton Brown carefully placed it right onto a plate like our thrift-store find. We both looked at each other, thinking the same thing. I flipped over the plate and inspected the seal on the bottom. 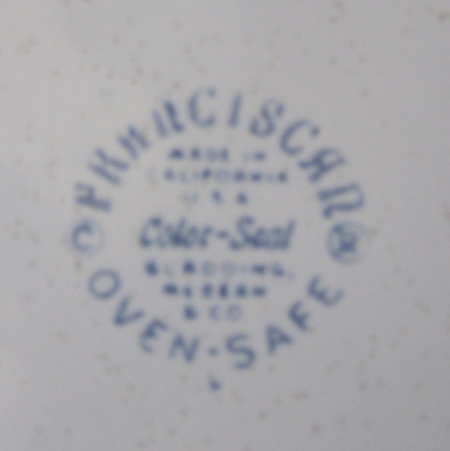 “FRANCISCAN” “Made in California U.S.A” “Gladding, McBean & Co.” I googled away. Much to our surprise and delight, our $2 thrift-store treasure was a famous design from Gladding, McBean & Co. The Starburst design was released in 1954, [one year after] our house was built. We’re pretty sure our find is the “oval serving platter” worth about $50 today, in good condition. Of course, we’re not interested in selling it. It’s our first Mid-Century Collectible!

This entry was posted on Thursday, August 5th, 2010 at 8:00 am and is filed under Art, Art: mcm thrift store find. You can follow any responses to this entry through the RSS 2.0 feed. You can leave a response, or trackback from your own site.

2 Responses to Our First Mid-Century Collectible